Discover the beauty of Sergiev Posad

A city of numerous names and housing one of the largest monasteries in Russia, Sergiev Posad boasts a strong religious and cultural history that has stood the volatile test of time. 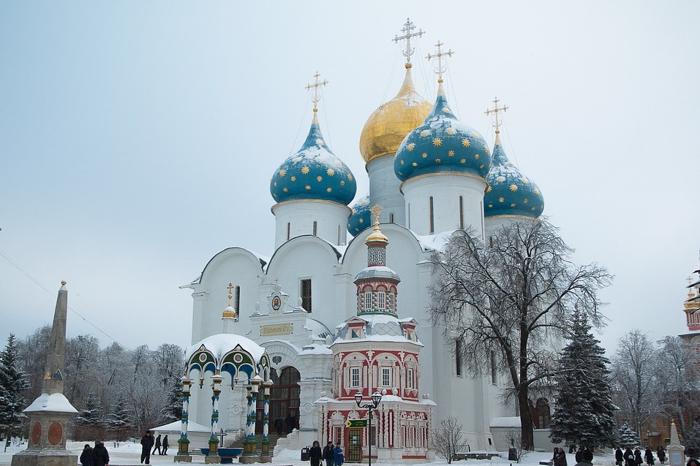 Sergiev Posad
A city of numerous names and housing one of the largest monasteries in Russia, Sergiev Posad boasts a strong religious and cultural history that has stood the volatile test of time.
Take a self-guided tour 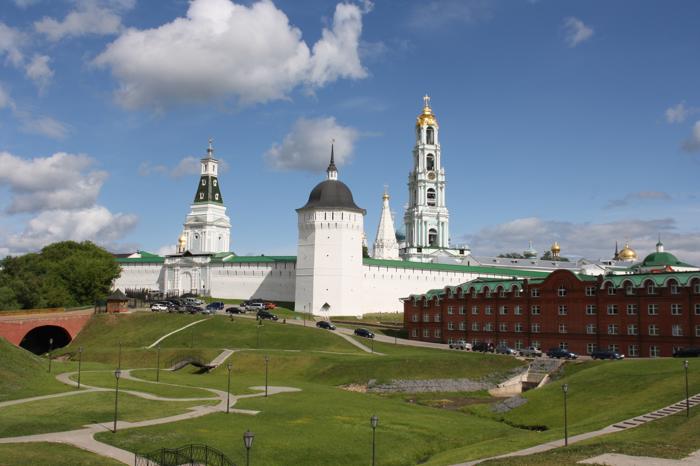 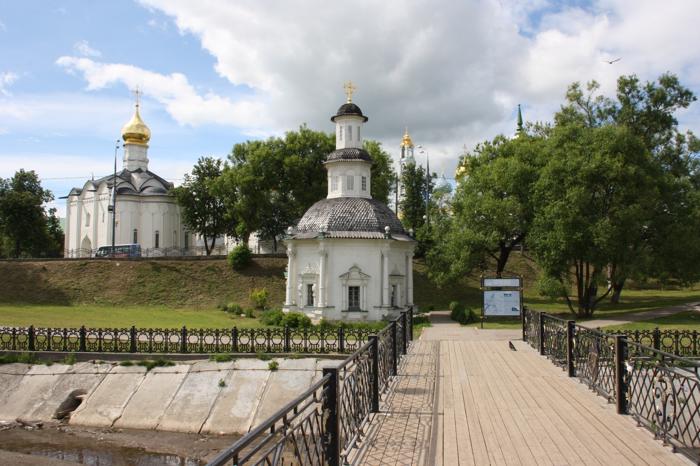 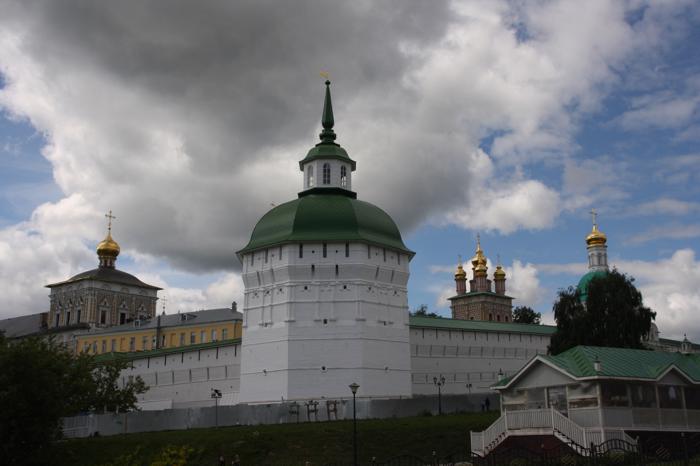 Sergiev Posad is a remarkable location in Moscow County Region. It's not enough to describe it as an 'ancient town, located 73 kilometres from Moscow”. Sergiev Posad is the spiritual capital of the Russian world.  It is here, at the peak of Makovets Hill, that Christian faith in the Russian state has taken form, flourished, overcome civil wars that threatened to tear down the nation itself – and where foreign invaders were defeated and overturned. The monastery at Sergiev Posad gave birth to a network of other monasteries across the Russian lands, and led the way through th 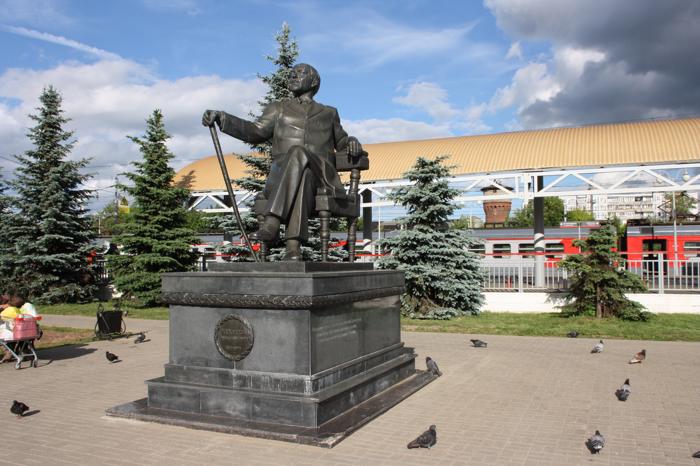 A small railway station appeared here at Sergiev Posad in 1862, at the time when the Moscow-Troitskaya Railway opened.  At that time, Sergiev Posad was the final station on the line. In fact the main purpose of building the railway was to link Moscow with the pilgrimage site of the Sergiev Posa 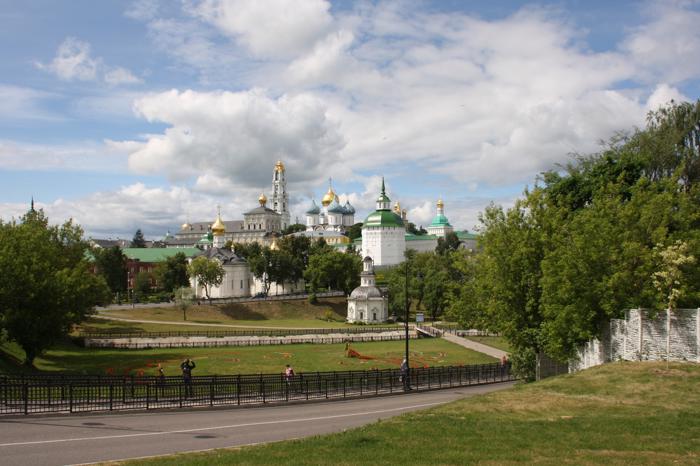 The Observation Platform on Blinnaya Hill

Opening up now before us we catch a dazzling panorama view of the Trinity St Sergius Lavra Monastery – the largest Russian Orthodox monastery in Russia. We will visit the monastery on our excursion to see its many famous sights from close up – but while we are able to take in the huge sc

The Pyatnitskaya Chapel and River Konchura

Even in our childhood we learn that water is the source of life. Monasteries need this water just as much. It's no surprise, then, to find that when Sergey, or St Sergius of Radonezh, chose the site for his monastery, he picked a place where several rivers flowed together.The monks blocked the River

This powerfully-built octagonal tower is a corner tower – meaning that it played a crucial role in the monastery's strategic defences.We ought to note that many Russian monasteries which appeared in latter times were noticeably similar in their external appearance to fortresses, while even tho 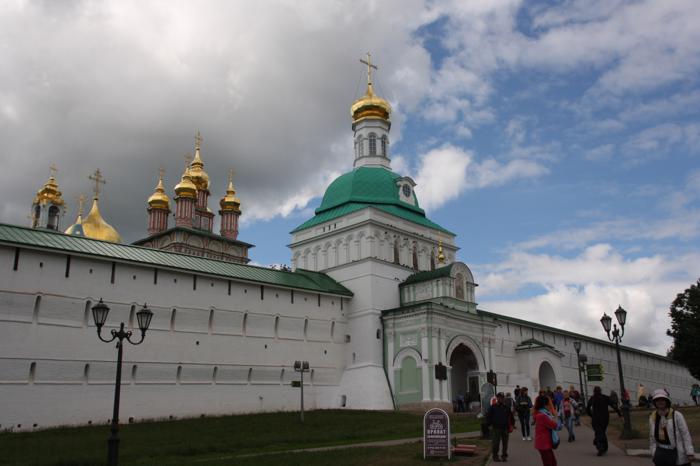 The Holy Gates. The Gatehouse Church of the Nativity of St John the Baptist

The Holy Gates are a feature of every Russian monastery – it is a name applied to the main entrance to the monastery. They are always adorned with an ikon showing the image of the most-venerated saint or festival with which the monastery is connected. In major monasteries, it was normal for a 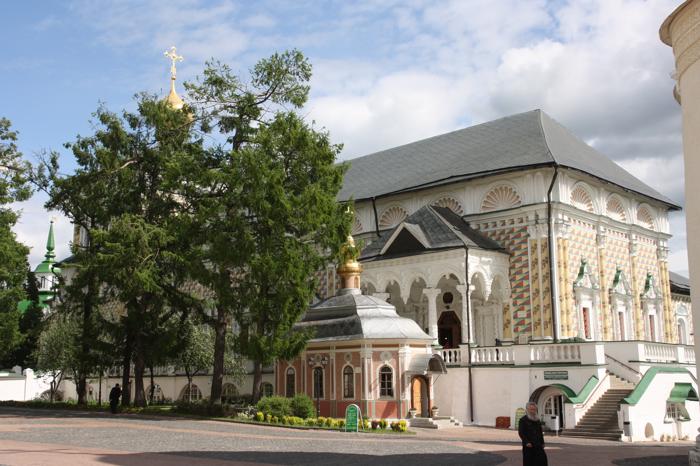 The Refectory Chamber, and Church of St Sergey of Radonezh

We see before us now a magnificent building with fine wall-paintings and decoration, which owes much in its appearance to both a huge church, yet also a civic building that contains a house chapel. This is not coincidental, since it happened that the refectory and the church merged into one space he 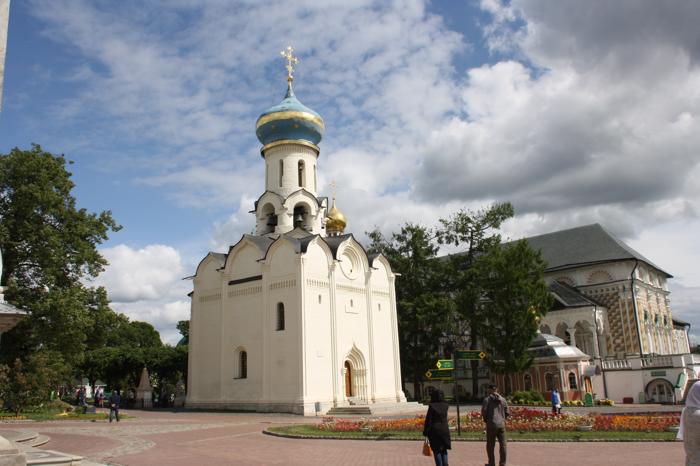 The Church of the Holy Spirit

The small Church of the Holy Spirit – despite its compact proportions – is one of the main places of interest within the Lavra monastery.  In age, it's somewhat older than even the Holy Trinity Church, which we are approaching.The full name of this small church is the Church Honouri 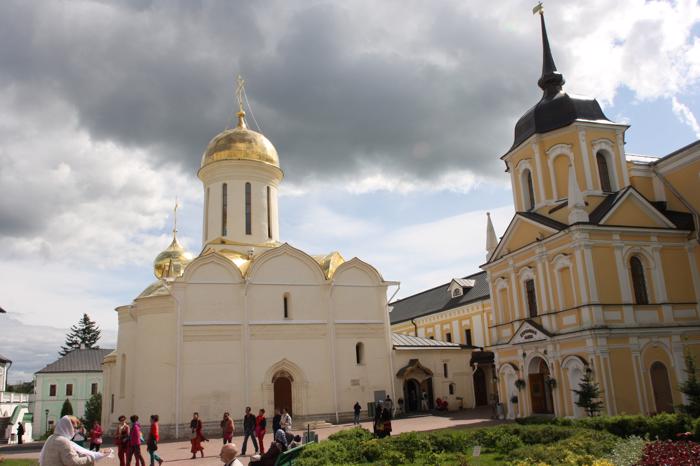 Although it may not be the largest church within the monastery, it is considered the most important.  It was on this same site that the original Chapel of the Holy Trinity was built by the monastery's founder, St Sergey of Radonezh.  The church houses his immortal remains, which are visite 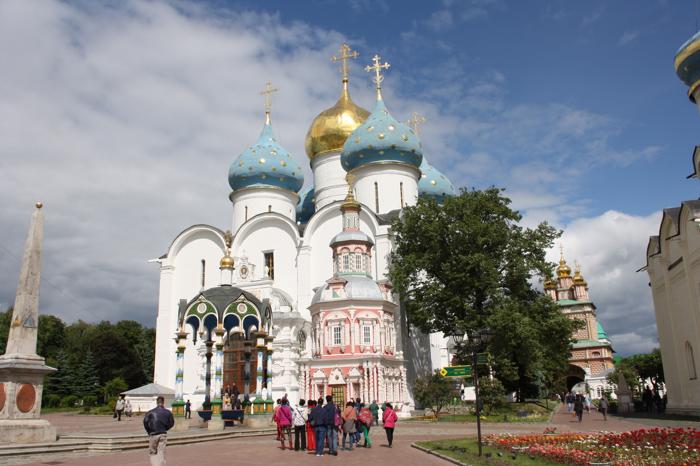 If we take a look at the Assumption Cathedral, and then compare it with the Holy Trinity Church, we quickly see how greatly the power of the state of Muscovy grew over the period of one and a half centuries.  This is the period that elapsed between the construction of these two very contrasted 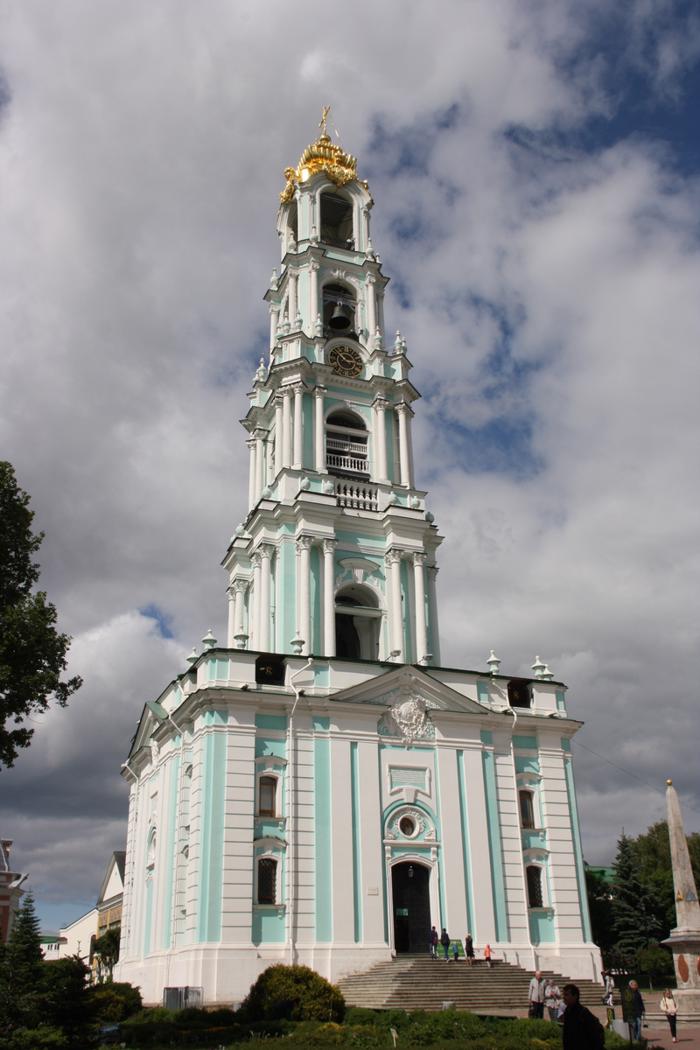 The Bell Tower is the most dominant architectural feature of the Trinity St Sergius Lavra. It stands almost like the mast of a great ship, sailing through a world of earthly vanity. Or perhaps we could call it a beacon, lighting the way for those at mortal risk in that sea...The idea of independent, 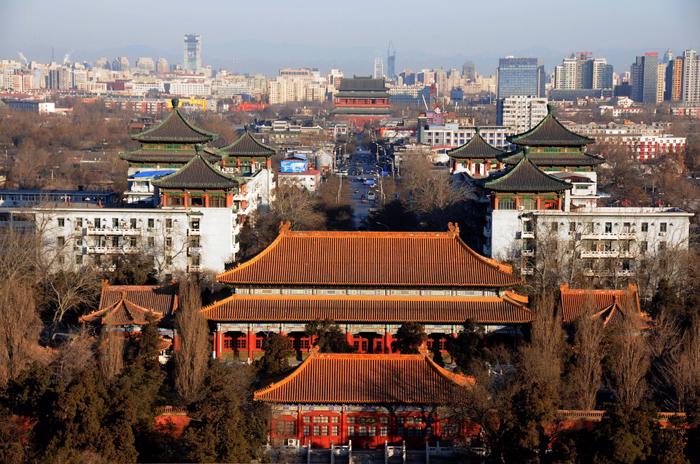 China's capital city has a long history evident in its world-famous landmarks such as the Forbidden City. For visitors, these sights are as fascinatin 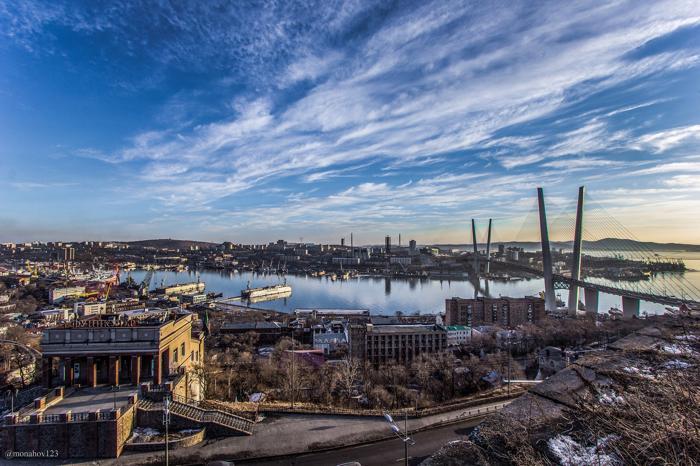 Overlooking Golden Horn Bay, Vladivostok is a major port city in Russia with an important naval base. There is beautiful scenery, unique architecture, 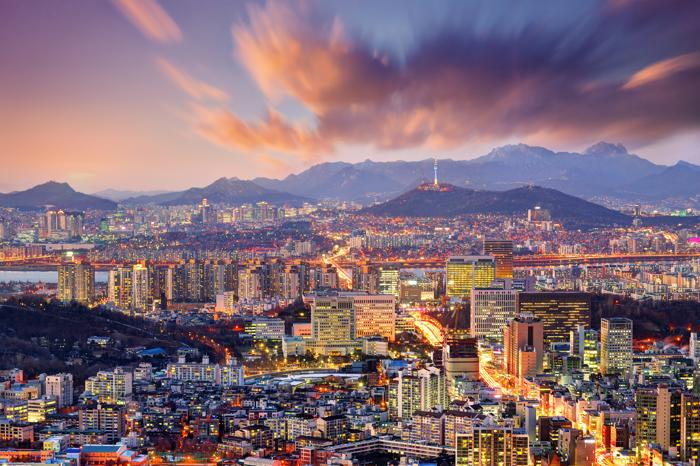 Within the historical Seoul city walls, we'll find a modern, dynamic metropolis known for its trendy music culture, an enviable shopping scene, and a