Discover the beauty of Ruskeala

Along the great Blue Highway stretches from Scandinavia to Russia, the village of Ruskeala certainly knows how to reinvent itself! Its marble quarries have been transformed into a resplendant regional park. 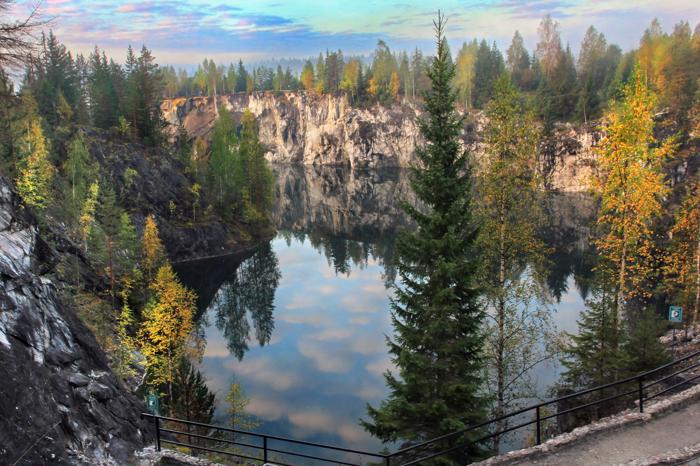 Ruskeala
Along the great Blue Highway stretches from Scandinavia to Russia, the village of Ruskeala certainly knows how to reinvent itself! Its marble quarries have been transformed into a resplendant regional park.
Take a self-guided tour 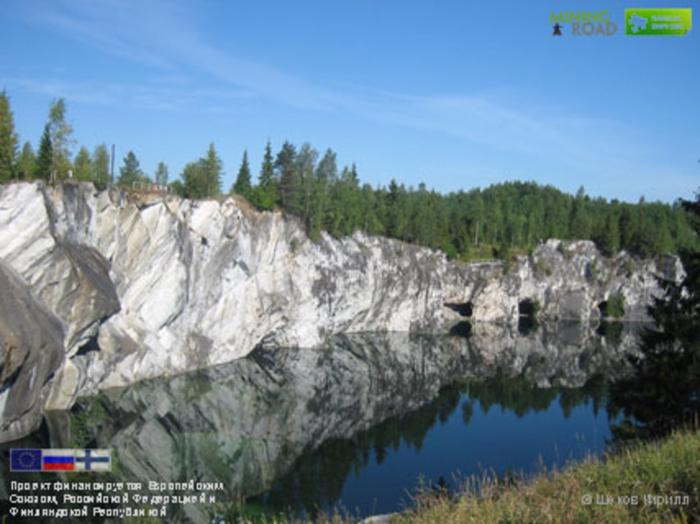 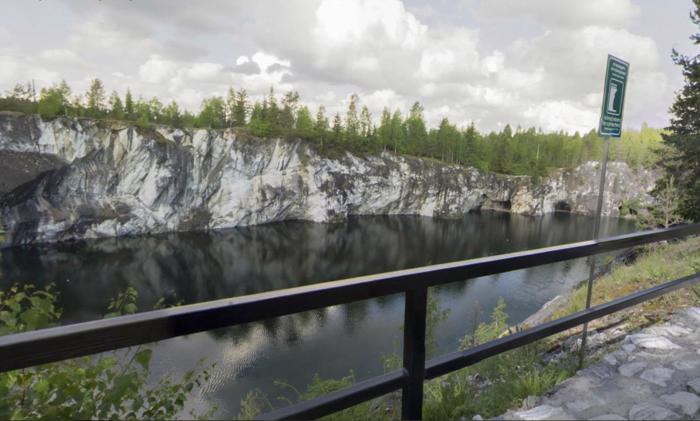 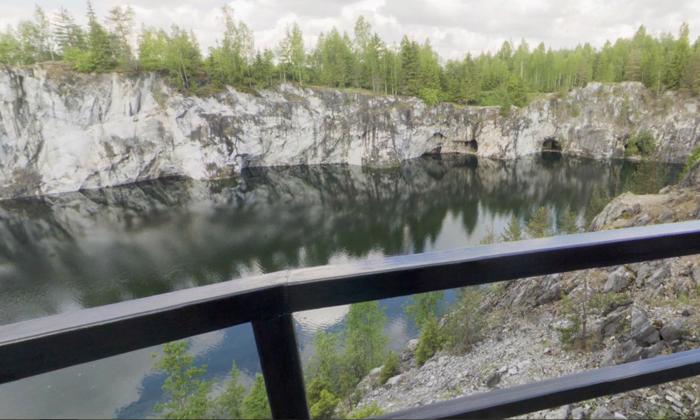 Mining Park “Ruskeala Marble Quarries XVII – the beginning of XX centuries” is a very rare symbiosis of a natural monument and an industrial museum. The park is a man-made “cup” in a solid marble block, cut by a system of shafts, drift ways and drives. You will find nothing similar in Europe! The pearl of the Mining Park is Mramornyj Canyon. Old and abandoned quarry is today organized for visiting by tourists, worshippers of historical heritage and “collectors” of natural phenomena and views.During recent years 40-60 thousand people per year visit the Mining Park. Excursion paths a 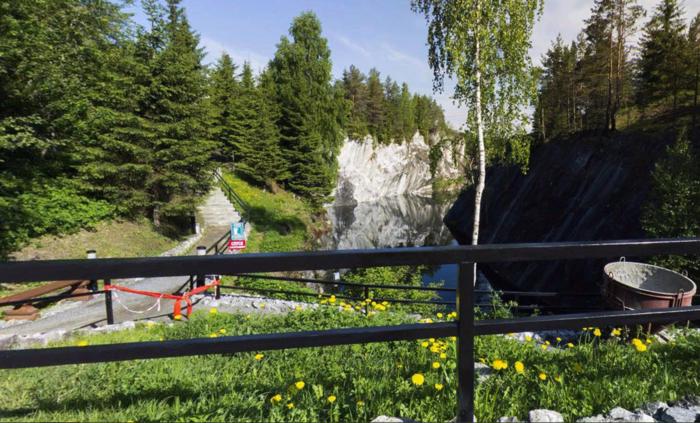 The beginning of the tour

Welcome to Ruskeala Mining Park! This tourist site was created on the territory of an abandoned marble quarries by Kolmas Karelia Association in 2005. The history of Ruskeala quarries traces its roots to the 17th century, to the times of the Swedes. Then marble was used for lime production. However 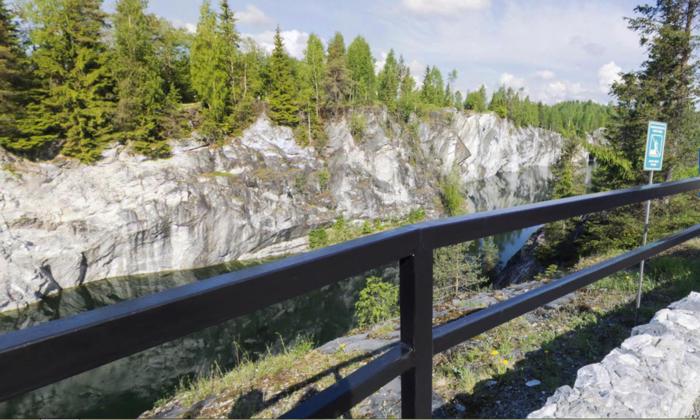 Panorama of the Main Quarry.

We are standing at a sightseeing platform, and there is view to the former Main Quarry of Ruskeala marble deposits. Its length is more than 400 m, the width is between 40 m and 150 m, and the depth reaches 100m. In 1769 -1939 the quarry was driven across the mountain, that the first stone-getters na

View to the drift ways

In the second half of the 19th century, starting from the 1870-s the quarry of marble in Ruskeala revived. Henceforth, marble was quarried not for the decoration of buildings, but for the production of lime, break stone and decorative chips. Lime was used for paper bleaching and as a construction ma 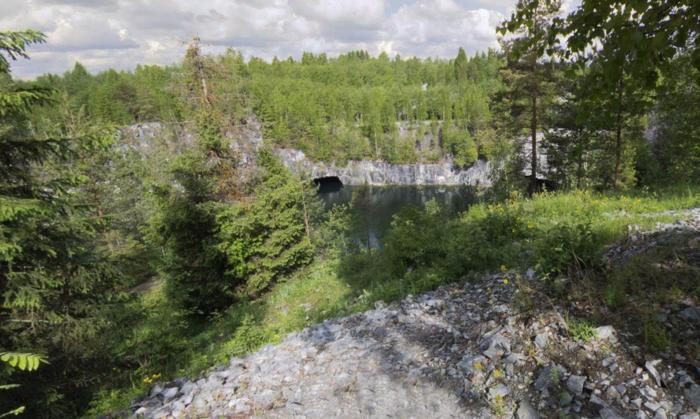 We are now in the northern part of the Main quarry, in the wall of which water-logged marble rock shelters are seen. The rock shelters are the remains of big underground tunnels, coming many tens and hundreds of meters into the ground. These are so-called “musical rock shelters”, named so for their 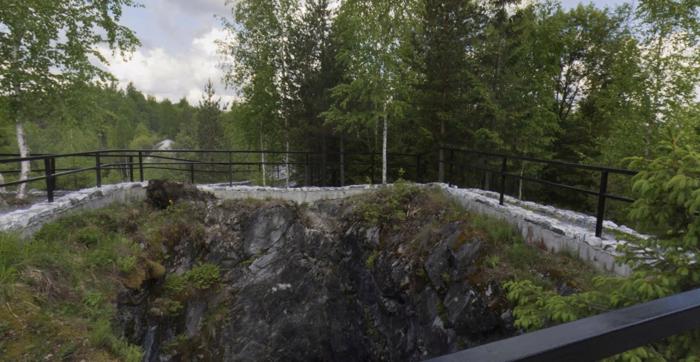 When quarrying marble for lime in the first third of the 20th century the Finns put down three deep shafts. Only one of them remained. The depth of this shaft reaches 55 m, and it is filled with water in lower part as it is connected to the water-logged quarry by two tunnels. Along the shaft workers

Now we are going to the drift way. This is a tunnel made by the Finns from the northern part of Belaya Mountain at the end of the 1930-s for convenient transportation of empty wagons to the shaft. In the depth this drift way is connected to the shaft and in 90-100 m comes to the Main quarry, coming 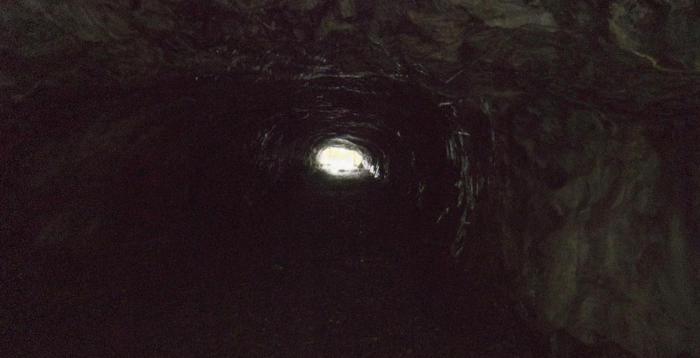 We are now in the place where the drift way comes through the shaft, in the depths of the marble Belaya Mountain. We are surrounded by stone from all sides. From the roof of the drift way water is dropping to turn into small icicles-stalactites. In the shaft you can see hitched niches for fixing the 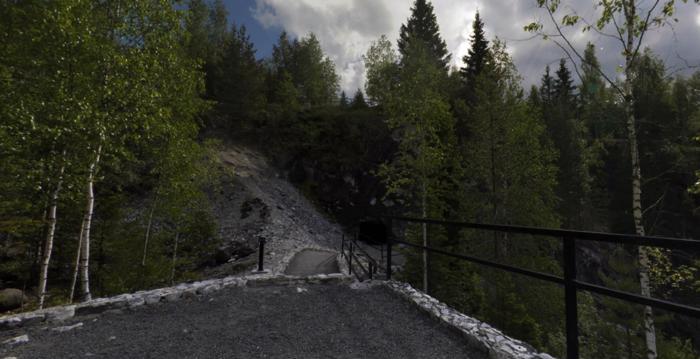 Exit from the drift way

We have again come to the Main quarry, and are now in the very northern part of it. Next to the drift way there are heaps of marble break stones, where you can easily find pieces of marble of at least three grades. The most part of the heaps are the marble of the first grade – “belogorskiy”, light-g 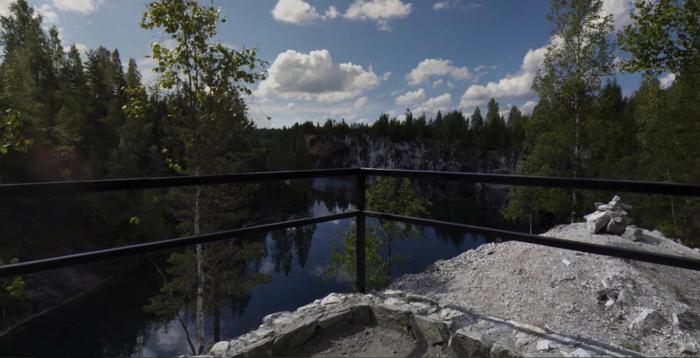 In the northern part of the Main quarry a special ground for different festive events is organized. On-stage performance groups often appear here. Songs in Russian, Karelian and Finnish language can be heard here. 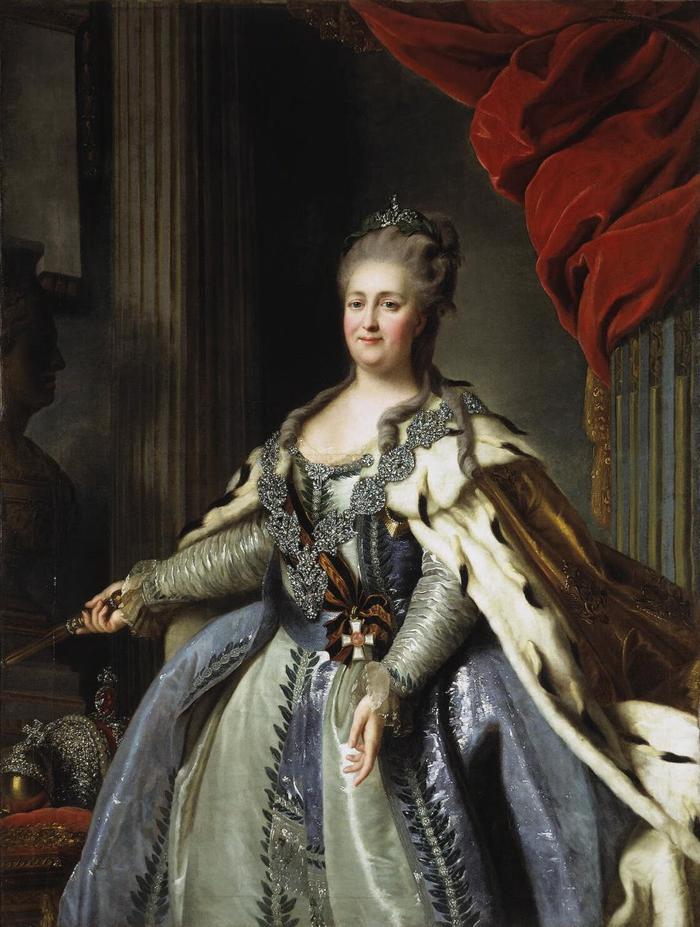 As it is known, the industrial development of marble started with Catherine the Great. But old, “Catherine’s” quarries disappeared in the depths of later mining a long time ago. However, a little fragment of quarry bank remained and it was later named “the Catherine’s cliff” in memory of the great e 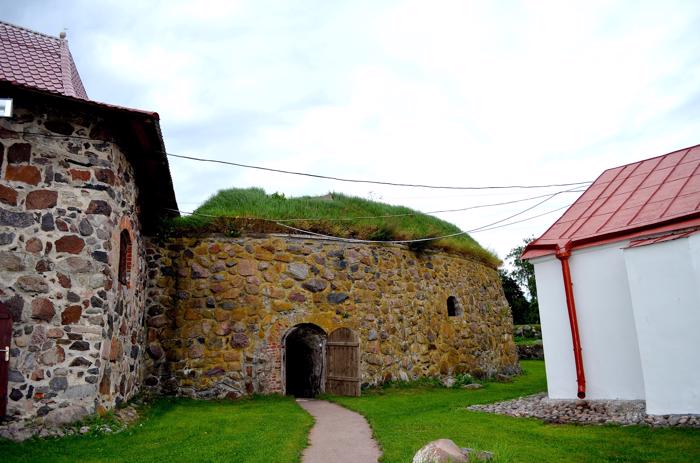 Between the lovesome Finnish lake country and the larger Ladoga Lake, this remote district is the epitome of the Baltoslavic retreat! Lose yourself in 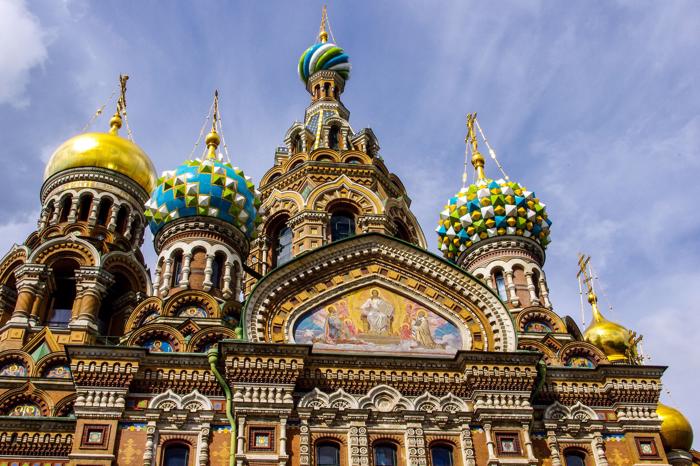 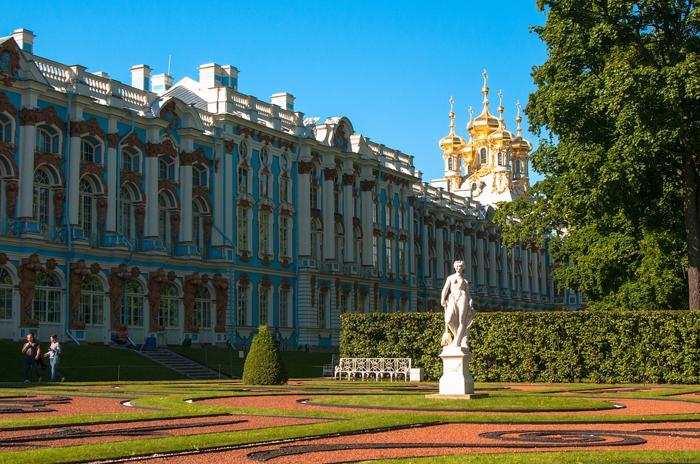 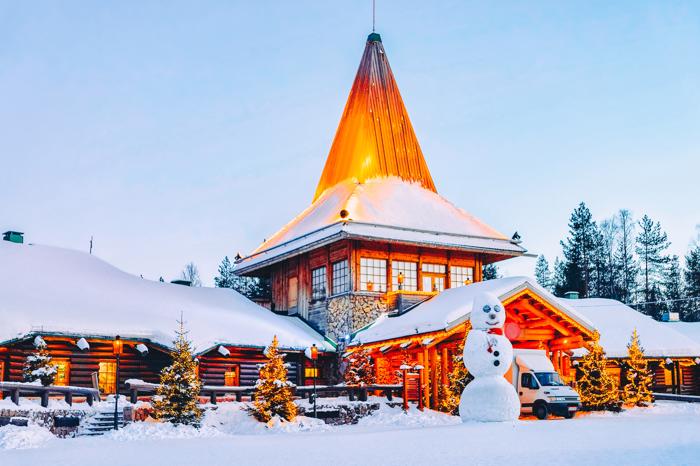 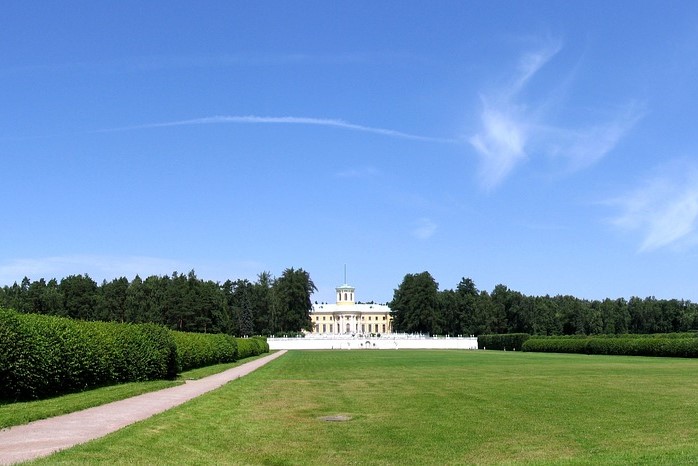 Just before the snaking Northern Dvina River spills out into the White Sea, it sails by Arkhangelsk. Much like its name, this angelic city is known fo 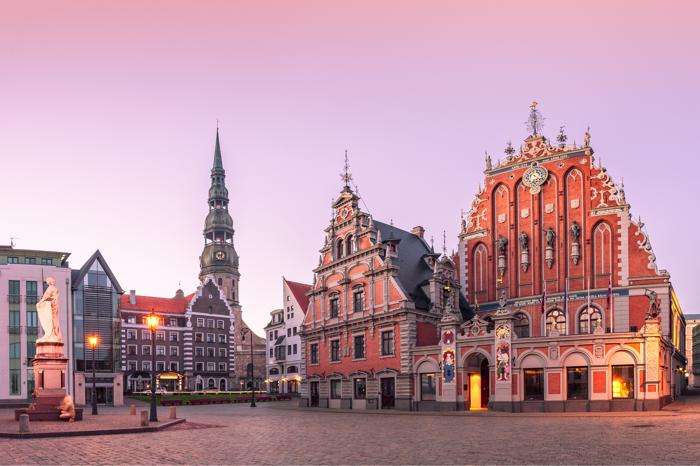 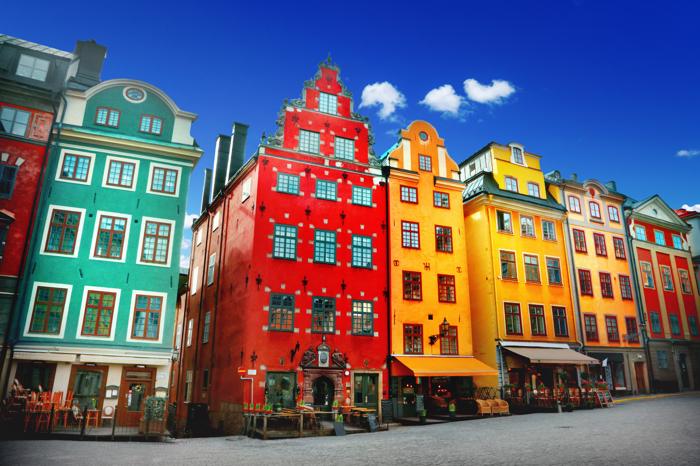 Stockholm prides itself on its style, riches, food, and history, and for good reason! Head on over to the Gamla Stan, then hit up the Royal Palace and