Discover the beauty of Pittsburgh

A city of stone and steel, Pittsburgh serves as a junction for three rivers. Explore this city through the Phipps Conservatory and Botanical Garden, the Andy Warhol Museum, and the Point State Park!

Pittsburgh
A city of stone and steel, Pittsburgh serves as a junction for three rivers. Explore this city through the Phipps Conservatory and Botanical Garden, the Andy Warhol Museum, and the Point State Park!
Take a self-guided tour 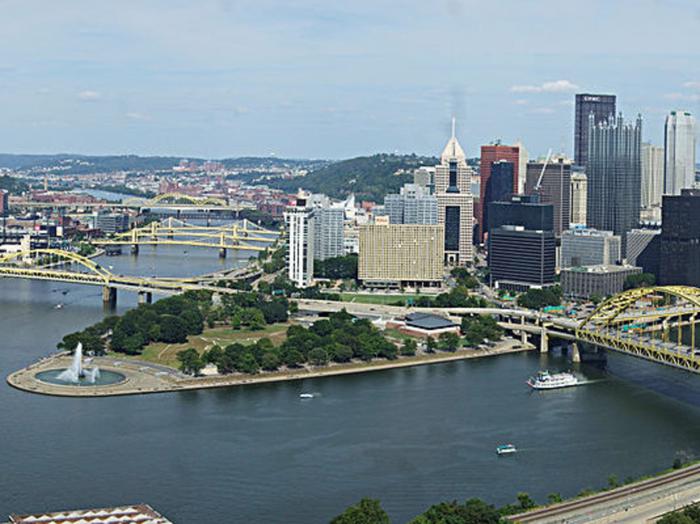 The City of Bridges: A Walk Through Pittsburgh
Get the app
Start exploring right now: 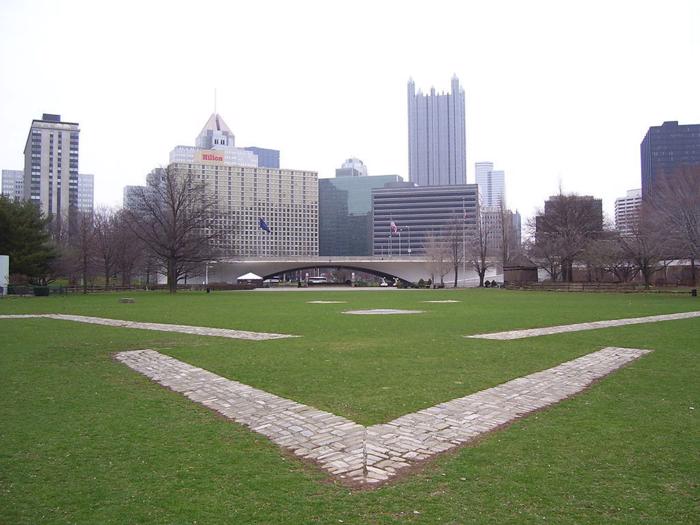 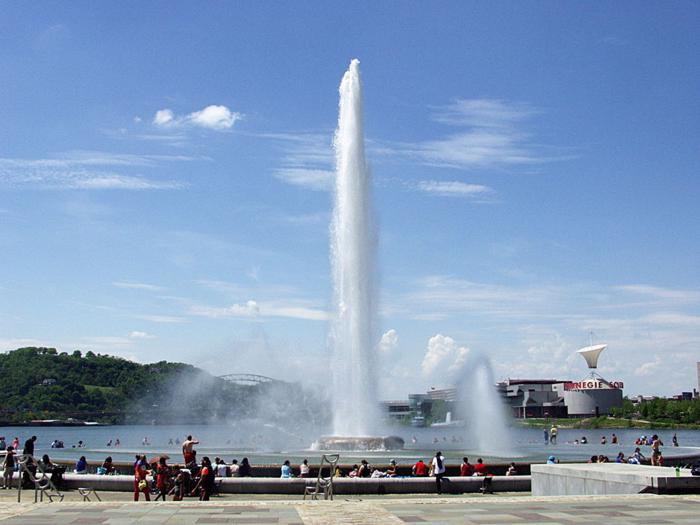 The City of Bridges: A Walk Through Pittsburgh

Welcome to Pittsburgh, Pennsylvania. As a city of many names, Pittsburgh is known as “The Gateway to the West,"America's Most Livable City,” and "Steel City,” to name a few. Founded in 1758, it was named in honor of British statesman William Pitt. Indeed, Pittsburgh’s legacy is a rich one, from its beginnings as a frontier village, to its current status as one of the nation’s leading industrial cities. We hope you enjoy this walking tour of its many sights and attractions. Licenses:Photo “ 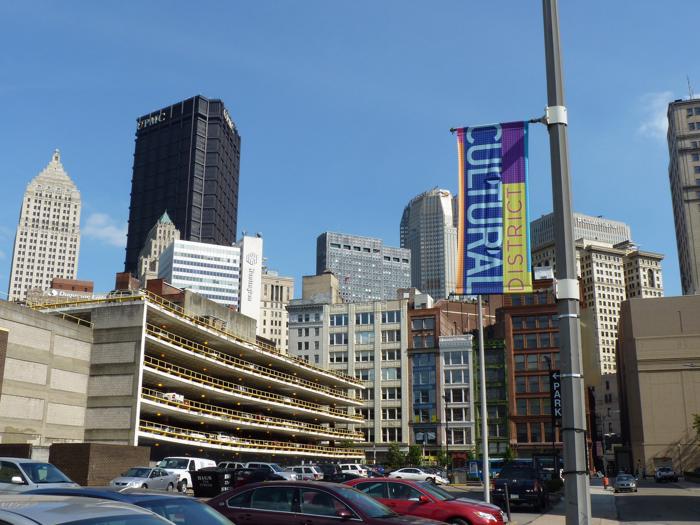 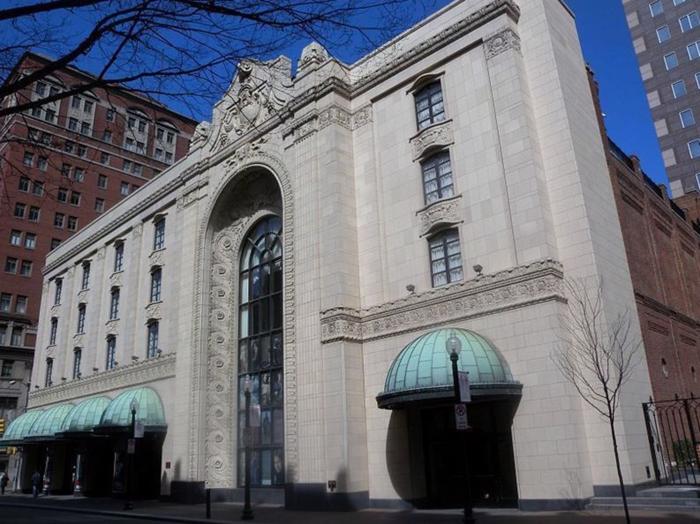 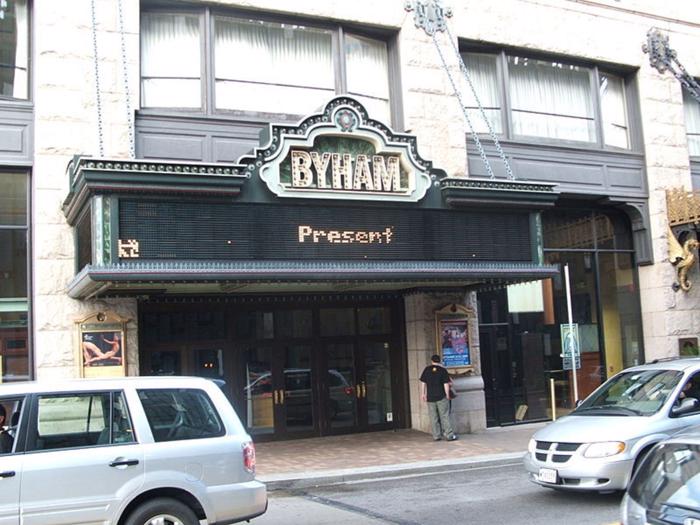 You are near Pittsburgh’s Cultural District, right in the heart of downtown. The 14-block area is famous for its elegant theaters, art galleries and installations, public parks, and for its many shops and restaurants, all conveniently bundled together for an exciting day or night on the town. But it wasn’t always so pristine or family-friendly. This area was actually a blighted red light district until the 1970s, when Henry John Heinz II – the CEO of the Pittsburgh-based H.J. Heinz Company – began an effort to revitalize the neighborhood as a cultural arts center. To 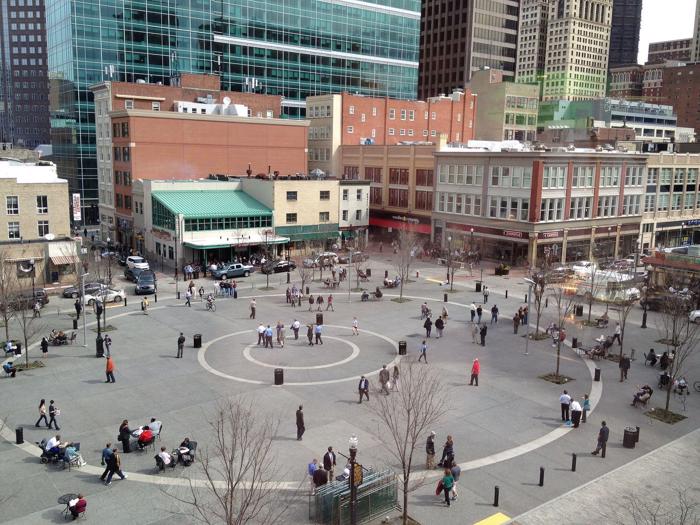 To your left is Market Square. While this isn’t inside the Cultural District proper, Market Square is one of downtown’s oldest public gathering spots and cultural centers. It was part of the original city plans back in 1784, intended as a public marketplace. And throughout much of its ea

To your right is Heinz Hall. The spacious and elegant theater was the first historic venue that the Pittsburgh Cultural Trust renovated and reopened. That was in 1971. Way before that, this was a popular movie theater, which opened in 1927 under the name “Loew’s Penn Theater.” The

Coming up on your right, that building with the steel mill-themed mural is the Byham Theater, a refurbished historic venue that goes back over a century. It opened in 1904 as a vaudeville house called the Gayety Theater, which saw many of the major stars of the day juggle and joke for the crowds. Th 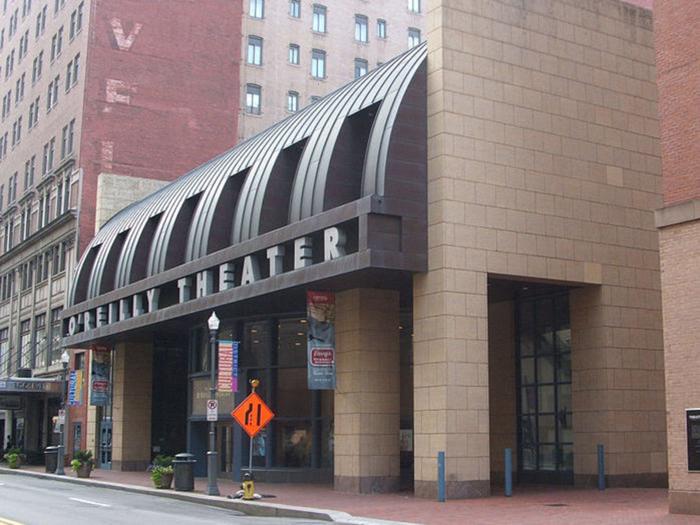 Coming up on your right is the O’Reilly Theater – which you’ll get a better look at when you reach Penn Avenue. The O’Reilly is the only major district theater that the Cultural Trust built from scratch. While the O’Reilly is a new building, it stands at the site of the 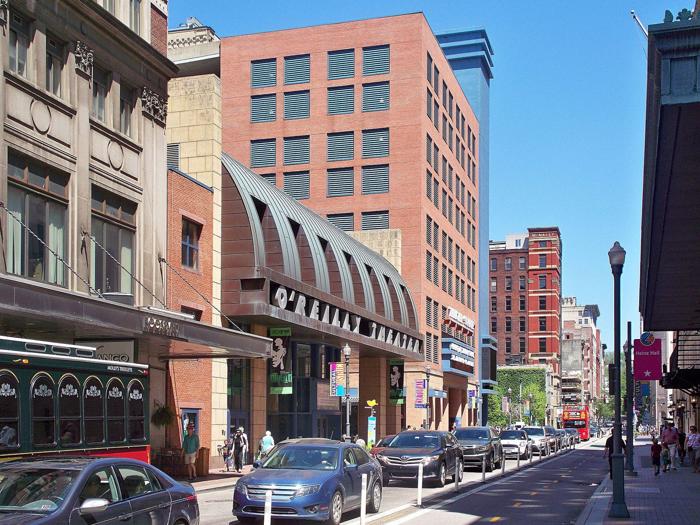 On your left, Theater Square is home to the Cultural District’s newest performance venue, “Cabaret at Theater Square,” which provides live music and drama. One professional company you can see perform at the Cabaret is the Pittsburgh Civic Light Opera. The musical troupe formed all 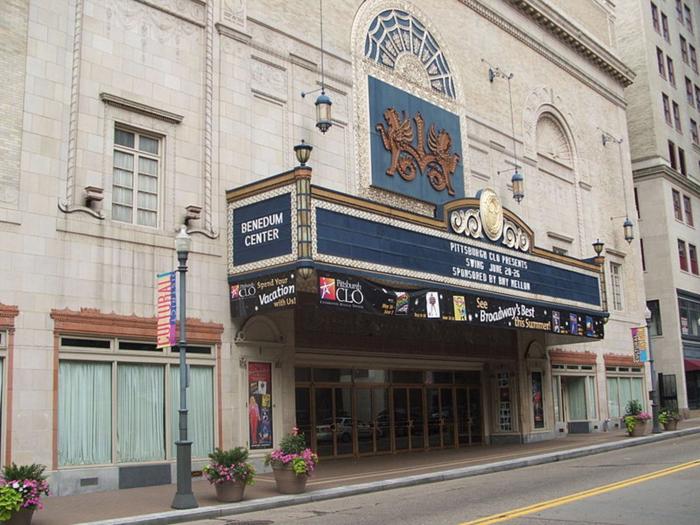 The Benedum Center to your right first opened in 1928 as a movie house called the Stanley Theater, where matinees cost a quarter during the Great Depression. It was financed by a man named James Bly Clark, who isn’t a household name, but was one of the founders of the world-renowned Metro-Gold 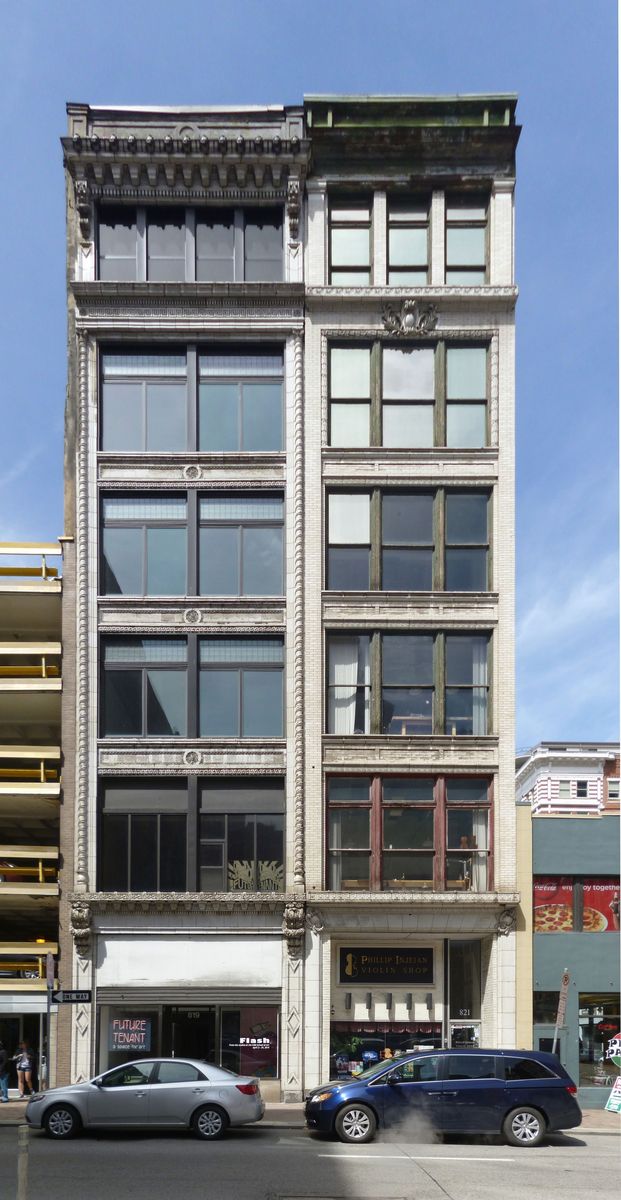 The art gallery coming up on your left is called Future Tenant. That’s because of the loose arrangement it has with its landlord. This building is currently donated to the gallery by the Cultural Trust. That’s an arrangement Future Tenant apparently doesn’t see as permanent, since, 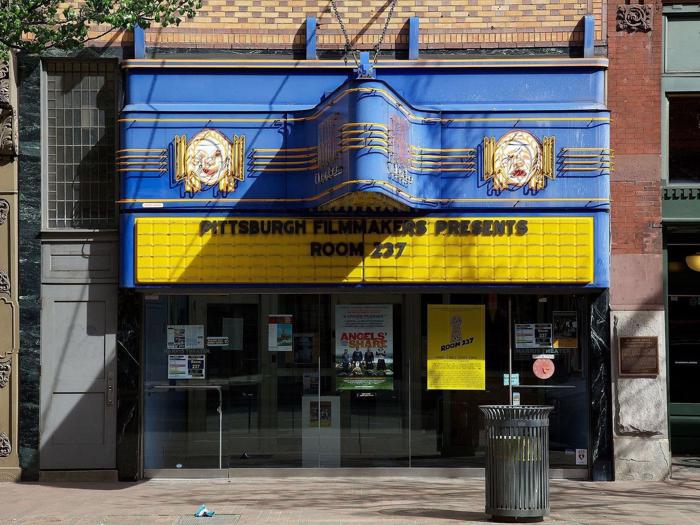 When the Harris Theater to your left first opened under the name Art Cinema, it was Pittsburgh’s only art-house theater. Then in the 1960s, when the neighborhood was a red-light district, the theater had to change with the times. And so its business became adult films. But the Cultural Trust b 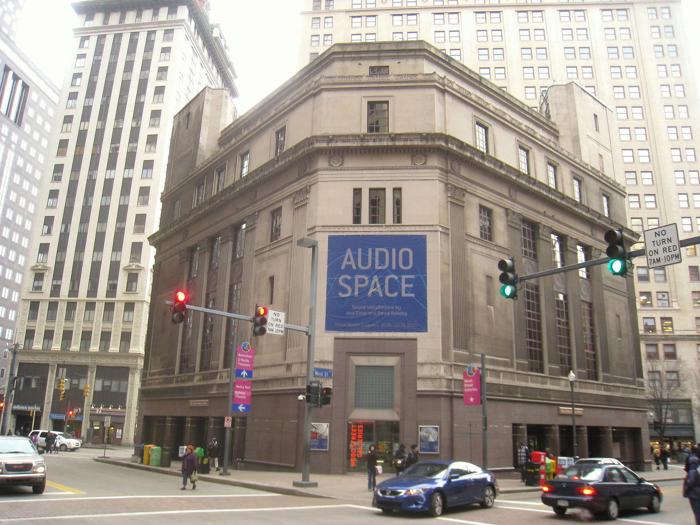 The Wood Street Galleries are to your left, in the old building above the Wood Street subway station. Like Future Tenant, the Pittsburgh Cultural Trust is a benefactor of this gallery, which specializes in featuring new media artists from all over the world. It’s free and open to the public, a 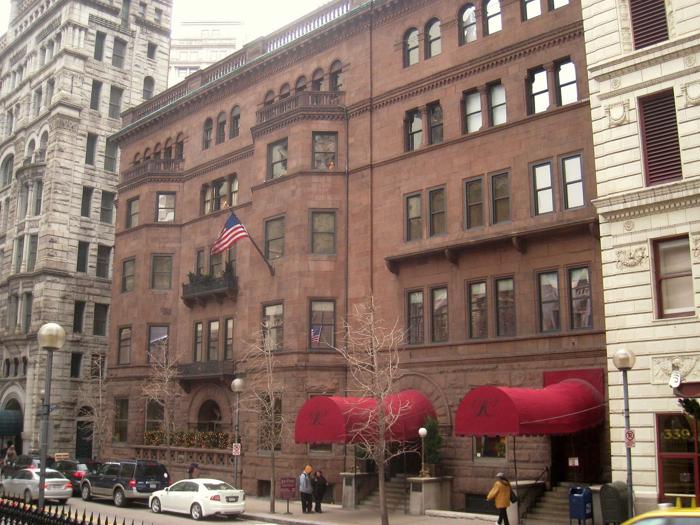 The Duquesne Club to your left has entertained affluent members since its founding in 1873. What started as a private business club where a handful of powerful male industrialists hobnobbed over brandy and cigars has evolved into a larger and more inclusive – but still invitation-only –